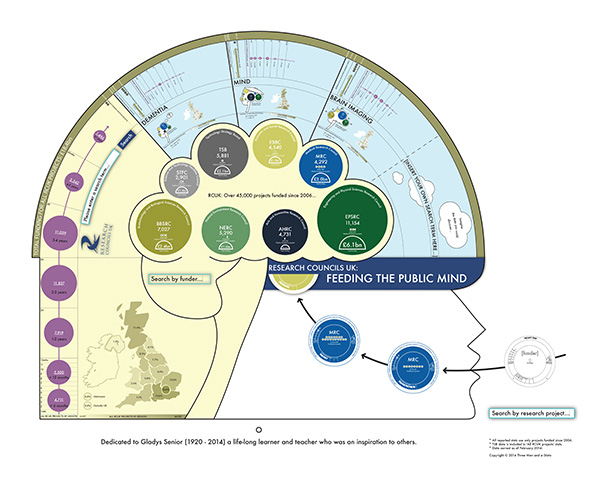 The following is a press release from the British Library. Read the original article here, or download a PDF of the article here.

The UK Research Council apportions around £3 billion of Government funding every year, covering the entire spectrum of academic disciplines. This funding is underpinned by an enormous collection of data, which for the first time this week has been brought to life in a new way as a result of a competition held by the Biotechnology and Biological Sciences Research Council (BBSRC), the Arts and Humanities Research Council (AHRC) and the British Library.

The competition, Visualising Research, challenged entrants to create a new visualisation of the UK Research Council funding data, which makes use of the online database ‘Gateway to Research’, and which tells a compelling story that anyone could understand. The two winning entrants were a professional agency ÜberResearch, and a collaboration between four infographic enthusiasts in Sheffield. Their win was announced at the British Library last night, as part of an event to mark the Library’s ongoing exhibition about data visualisation, Beautiful Science.

The winning entry in the professional category was created by ÜberResearch, who have created a data map showing the overall distribution of funds across topics, using bubble, placement and colour effects to give more detail on the distribution. It also applies this same technique to the portfolios of different research institutions and universities, revealing their unique preferences, priorities and gaps. Their entry can be viewed in full online here.

In the non-professional category, the winning entry, created by ‘Three Men and a Stato’ and entitled ‘Feeding the Public Mind’, shows an infographic which they describe as ‘like looking out from the viewing platform of a skyscraper’. Using the model of a brain, the four team members have displayed the whole breadth and depth of the funding picture, and then encourage users to ‘peer through the telescope’ to see the details of specific areas. You can view their entry in full online here.

Lee-Ann Coleman, Head of Science, Technology and Medicine at the British Library, said: “The British Library is committed to making information easily accessible through its own work supporting researchers, and so we’re delighted to be part of this competition, which is all about how you can communicate complex data and ideas in an innovative way. We’re also delighted to celebrate data in a broader sense, as part of our ongoing exhibition at the British Library, Beautiful Science, which looks at how data has been visualised through history.”

For more information and examples, visit: http://datasets.org.uk/compo/compo.html or follow @ScienceBL.

Beautiful Science: Picturing Data, Inspiring Insight runs at the British Library until 26 May 2014.

The British Library is the national library of the United Kingdom and one of the world's greatest research libraries. It has the world's largest and most comprehensive research collection, including world-leading scientific, technical and medical information resources. These support researchers engaged in academic, commercial and public service research across all scientific disciplines. The Library runs regular science events and participates in major projects that enable better access to information for researchers, including the British Library DataCite service and Europe PubMed Central.

The Biotechnology and Biological Sciences Research Council (BBSRC) invests in world-class bioscience research and training on behalf of the UK public. Our aim is to further scientific knowledge, to promote economic growth, wealth and job creation and to improve quality of life in the UK and beyond.

Funded by Government, and with an annual budget of around £467M (2012-2013), we support research and training in universities and strategically funded institutes. BBSRC research and the people we fund are helping society to meet major challenges, including food security, green energy and healthier, longer lives. Our investments underpin important UK economic sectors, such as farming, food, industrial biotechnology and pharmaceuticals.

For more information about BBSRC, our science and our impact see: http://www.bbsrc.ac.uk

Arts & Humanities Research Council (AHRC): Each year the AHRC provides approximately £102 million from the Government to support research and postgraduate study in the arts and humanities, from languages and law, archaeology and English literature to design and creative and performing arts. In any one year, the AHRC makes approximately 700 research awards and around 1,350 postgraduate awards. Awards are made after a rigorous peer review process, to ensure that only applications of the highest quality are funded. The quality and range of research supported by this investment of public funds not only provides social and cultural benefits but also contributes to the economic success of the UK. www.ahrc.ac.uk