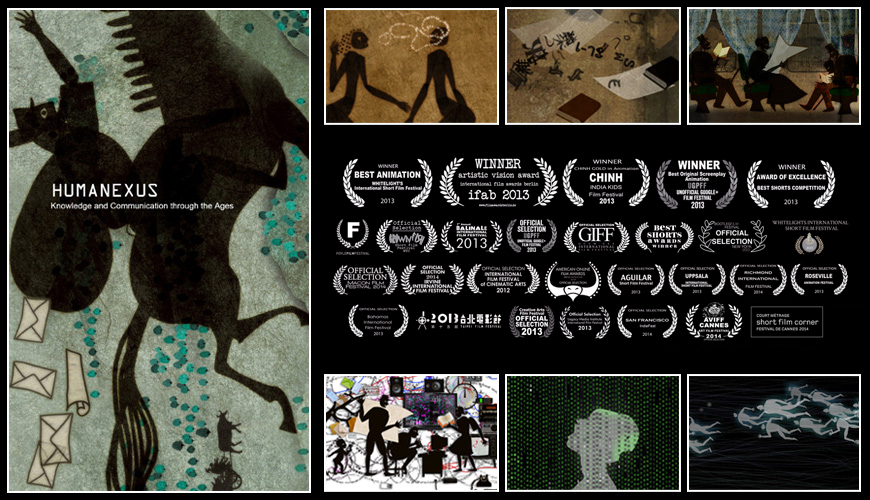 
Download a letter sized handout about the film: high-res | low-res

Humanexus is the product of a close collaboration between artist Ying-Fang Shen and Indiana University professor Katy Börner, an expert in the theory and practice of data mining and information visualization who suggested the initial story and provided guidance and resources along the way. Viewers of Humanexus will be struck by the evocative relationship between Shen’s visuals and the rich aural landscape created by composer and sound designer Norbert Herber, a senior lecturer in Indiana University’s Department of Telecommunications.

This semi-documentary animation visualizes human communication from the Stone Age to today and beyond. It aims to make tangible the enormous changes in the quantity and quality of our collective knowledge and the impact of different media and distribution systems on knowledge exchange.

Starting with storytelling, we get to re-experience the invention and impact of writing, printing, telegraphing, calling, emailing, and texting on human communication. In parallel, we see the development of transportation systems, the typewriter, Morse code, the phonograph, the motion picture projector, the radio, the television, and the phone.

With each new invention, knowledge is delivered and received more effectively, directly, and rapidly than ever before, making possible the next generation of media and delivery systems. With the advent of computers in the 1940s and the popularization of the Internet in 1990s, information exchange between computers and humans became possible.

Today, we are weaving social and technological networks on a global scale, we have moved much of our activities online, and most of our digital footsteps are recorded and can be traced and mined by others now or in any future. The intensity and immediacy of information flow effectively creates a global brain, or a humanexus of billions of biological brains and many more technological artifacts continuously searching, sensing, reasoning, and acting. In the process, our lifestyle and the landscape of knowledge are shifting continuously and drastically.

Presuming we have not yet destroyed elements critical to our survival on Earth, different futures await: 1. We might drown in the great flood of (un)confirmed facts; might wash out our identity in massive information waves, and become disembodied and detached from the real world. A computer, online access, and anonymous login suffice to rule the (virtual) world. Many people will decide to discard their mortal body and to upload their intellect to the Internet, yet might get quickly diluted and soon erased.

REWIND. 2. Rapid information diffusion channels support the spread of knowledge and wisdom but also of viruses and hatred. Human bodies are not optimized for global nor long-term thinking. Local solutions might not work globally, short-term solutions are likely to prevent long-term sustainability. Media and systems developed to amplify perception, cognition, or action might be used for good or bad. Hatred might spread and war result. At some point, total isolation might result in total destruction on Earth.

REWIND. 3. Surface, unplug, and reconnect. Embrace Earth. Invent socio-technical infrastructures in support of sustainable futures. Use not abuse technology. Control to ensure we are in control of our collective destiny. Tell multi-media stories to teach; play with advanced technology to learn. Always ask: Is this what we want? What do we want?