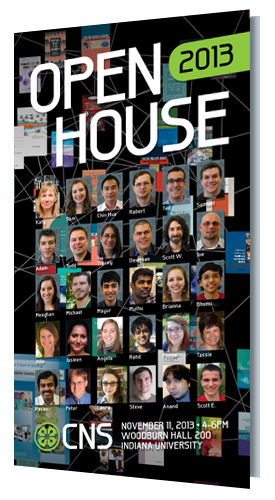 Each year, we invite our friends and colleagues to join us for two hours of enlightening talks, hands-on demos, snacks, and drinks. We work hard to make our Open House a fun and educational soirée where guests are free to roam about, explore our visualizations, and of course ask questions! We'd like to thank all who joined us for this year's Open House, and to all who presented their work. We enjoyed spending time with you all, and sharing the work we've been doing over the past year and the ideas that will guide our future endeavors.

Click the image on the right to see the 2013 invitation, which contains more pictures and information about the year's visualizations, publications, tools, and Places & Spaces: Mapping Science exhibits.

Click here to see some photos from this year's Open House.

Buzz about the film and recognition for Shen has built rapidly over the past year. Recently, Humanexus was named an Official Selection of the 2013 Guam Film Festival, scheduled to take place September 24th through the 29th. This honor comes on the heels of the film’s nomination to the “Best Animation” category in the 2013 Taipei Film Festival. As an added bonus, the latter festival brought Shen’s work back to the artist’s own place of birth, as Humanexus received screenings in venues throughout Taipei during the festival’s three-week run. Then, in early August, the film was chosen for an Artistic Vision Award by the International Film Awards Berlin. It has also received an Award of Excellence from the Best Shorts Competition in La Jolla, California, and was named an Official Selection in New York’s Bootleg Film Festival and the Balinale International Film Festival. Such accolades serve as testimony to both the relevance of the film’s message and the artistic vision through which Shen conveys that message.

You can watch the trailer for Humanexus here and learn more about the production at the film’s official website. 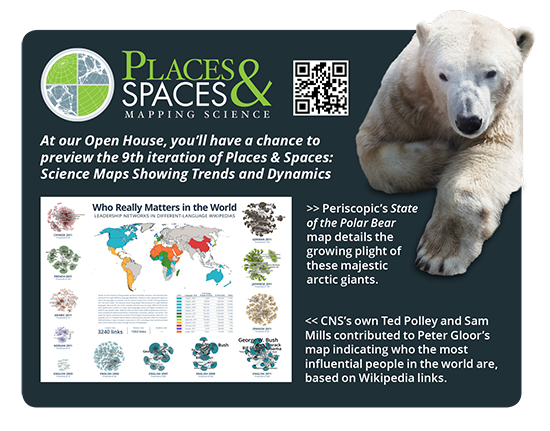 CNS launched its first Information Visualization MOOC in January 2013, attracting participants from more than 100 countries. The course provides an overview about the state of the art in information visualization. It teaches the process of producing effective visualizations that take the needs of users into account.

Anyone interested in generating temporal, geospatial, topical or network analyses and visualizations from either personal or professional data would benefit from the course.

The homepage for the Information Visualization MOOC offers an introductory video, a course schedule, biographies of Börner and the other instructors, and a registration link. Everybody who registers gains free access to the Scholarly Database (26 million paper, patent and grant records) and the Sci2 Tool (100-plus algorithms and tools).

It is one of the first MOOCs offered by IU and the first to offer an opportunity for students to work in teams with actual clients like researchers interested in understanding data patterns and trends, government agencies developing visual interfaces for data holdings, industry representatives looking to maximize return on investment, medical doctors seeking cures, and not-for-profit organizations hoping to communicate impacts and achievements.

Due to the success of the course, it will return in January 2014. 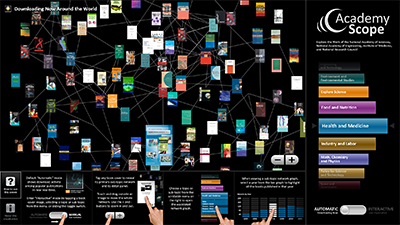 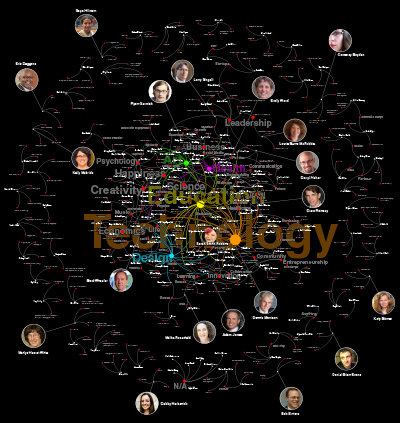 Shown here are all TEDxBloomington attendees who registered by March 8, 2013 together with the subjects they like 313 subject nodes in colors. People are linked via popular topics. The resulting bi-modal network has 508 nodes connected by 553 edges. It is dominated by the “Technology” (listed 33 times), “Education” (21), “Art” (13), “Design” (12), “Health” (11) nodes. Sizes of subject nodes and labels correspond to the number of attendees who listed them. The densely connect core of the network, also called giant component, is surrounded by smaller networks. For a long time, only one person wanted to talk about “Beer” and this was the only subject he wanted to talk about (top center). Only recently, another registration interconnected “Beer” with “Startups” and from there to other people and subjects in the network. Portraits of the speakers from this year’s conference are placed by their subjects of interest. A listing of all subjects and their counts is given in the lower left.