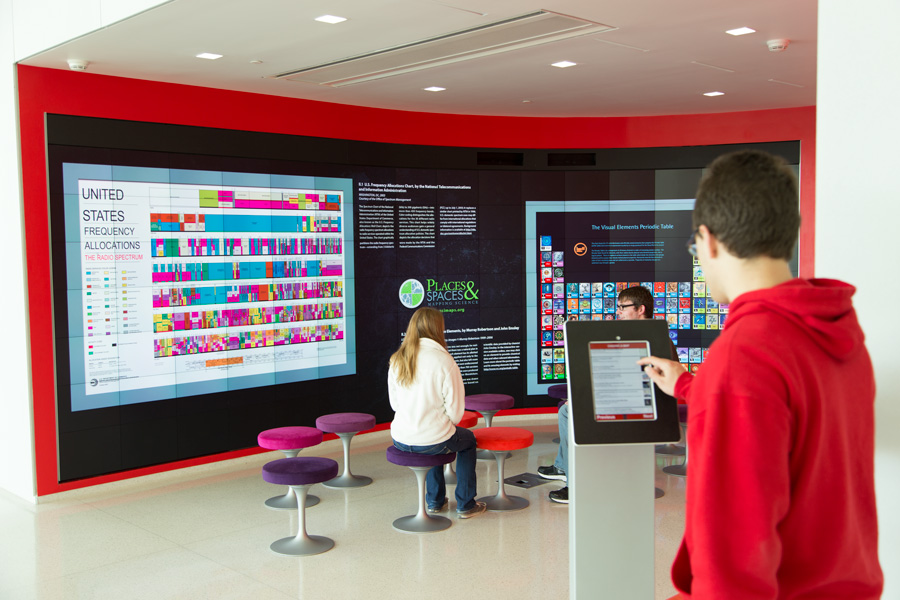 From October 14th through the 27th, the Places & Spaces: Mapping Science exhibit was featured on the iPearl Immersion Theater located in North Carolina State University’s Hunt Library. The October event marked a fascinating symbiosis of content and medium, with the visionary maps that make up Places & Spaces providing a perfect complement to the stunning visual experience of the iPearl Immersion Theater.

According to Mike Nutt, Digital Media Librarian at North Carolina State University and one of the coordinators of the exhibit, the maps were quite well received.

"The goal of the iPearl Immersion Theater is to create experiences that change the way our visitors see the world. Few of our exhibits have captivated our patrons like Places & Spaces. One visitor to the exhibit said, 'I have never seen anything like it before.'"

Now in its ninth year, the Places & Spaces exhibit has traced the evolution of science maps, featuring the most powerful examples of knowledge domain mapping, novel location-based cartographies, data visualizations, and science-inspired art works. Created by leading figures in the natural, physical, and social sciences, scientometrics, visual arts, social and science policymaking, and the humanities, the maps in Places & Spaces allow us to better grasp the abstract contexts, relationships, and dynamism of human systems and collective intelligence. Individually and as a whole, the maps of Places & Spaces allow data to tell stories which both the scientist and the layperson can understand and appreciate.

Over the course of its nine-year existence, these maps have adorned the walls of some of the most prestigious libraries, museums, and universities around the world (see scimaps.org/exhibitions for a complete listing of venues). By presenting the mapping of science in the context of a more traditional exhibit-going experience, Places & Spaces has brought together two cultural locations—the lab and the gallery—that have often been viewed as ideologically and aesthetically remote.

In keeping, however, with the exhibit’s commitment to both tracing science mapping’s past and offering glimpses of its future, Places & Spaces partnered with North Carolina State University’s innovative Hunt Library and its state-of-the-art iPearl Immersion Theater to offer a new way to experience this important collection. With its 7x16-foot Christie® MicroTiles® digital display, the iPearl Immersion Theater surrounds viewers with larger-than-life maps of science that are visually arresting from afar and amazingly sharp up close. With media outlets like Time magazine, Ploughshares, Architect magazine, and others placing it at the forefront of a renaissance in library design and capabilities, the Hunt Library was the perfect cutting-edge venue to feature the groundbreaking work of Places & Spaces: Mapping Science.

Said Nutt, "These incredible visualizations literally stopped people in their tracks. After an initial moment of awe and wonder, people invariably moved in closer to examine the details of the maps. The Hunt Library doesn't have book stacks to browse, so we depend on exhibits like Places & Spaces to provide that kind of serendipitous knowledge discovery. I believe it has set a new benchmark for our video wall content program."