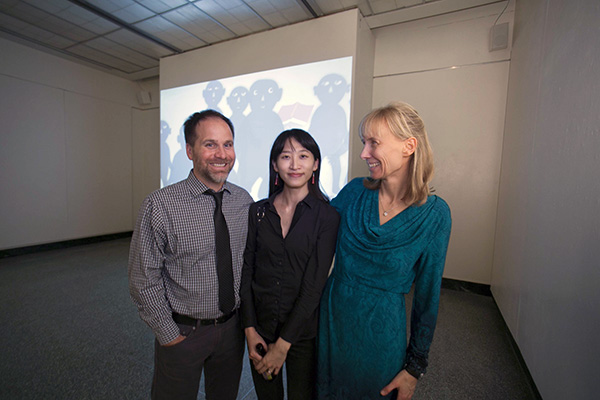 Ying-Fang Shen’s animated film Humanexus: Knowledge and Communication through the Ages depicts the ever-accelerating spread of information and communication over the course of human history. It’s perhaps fitting, then, that the film itself has been caught up in a similar momentum, with buzz about Humanexus and recognition for Shen building rapidly over the past year.

Humanexus is the product of a close collaboration between Shen and Indiana University professor Katy Börner, an expert in the theory and practice of data mining and information visualization who suggested the initial story and provided guidance and resources along the way. And viewers of Humanexus will be struck by the evocative relationship between Shen’s visuals and the rich aural landscape created by composer and sound designer Norbert Herber, a senior lecturer in Indiana University’s Department of Telecommunications. The result of their efforts tracks the evolution of human communication from cave scrawls to Twitter feeds. And while the film captures the giddy exhilaration of discovery and creation, it also strikes darker notes as it imagines the crucial point at which humanity finds itself, a decisive moment that pivots between a path of continued creativity and innovation and one of information overload and message breakdown.

Ultimately, Humanexus argues that the question of “What kind of future do we want?” is one that each of us has the power to address. To begin engaging with the issues raised by this provocative and visually striking work, watch the trailer for Humanexus here on YouTube. You can also learn more about the production by visiting the film’s official website.