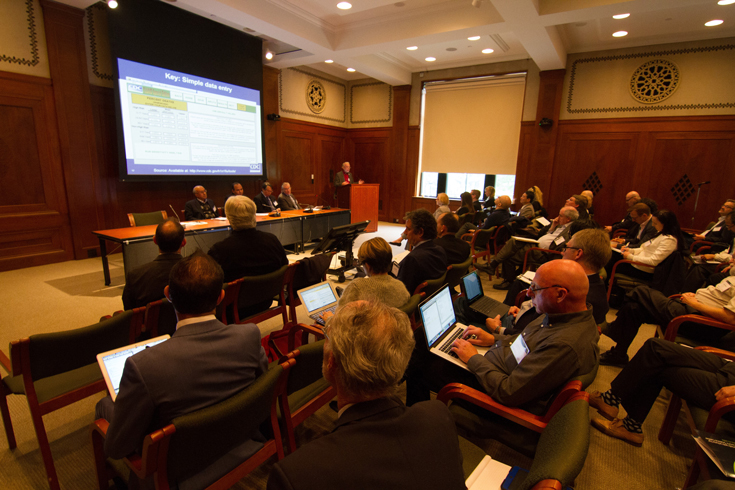 BLOOMINGTON, Ind. -- Indiana University data scientists will gather experts from across the globe in the nation’s capital starting today to review opportunities and challenges associated with the use of big data, visual analytics and computational models to advance public policy decisions related to science, technology and innovation.

The Modeling Science, Technology and Innovation Conference takes place May 17 and 18 at the National Academy of Sciences in Washington, D.C. The two-day event is funded by the National Science Foundation’s Science of Science and Innovation Policy program, the Cyberinfrastructure for Network Science Center, the IU Network Science Institute and industry.

The event is organized by Katy Börner and Staša Milojević of the IU School of Informatics and Computing's Department of Information and Library Science and the IU Network Science Institute. The welcome and opening remarks will be presented by C.D. "Dan" Mote Jr., president of the National Academy of Engineering.

The conference also features presentations by high-profile science policy makers from government, academia and industry, including representatives from the National Institutes of Health, Centers for Disease Control and Prevention, National Oceanic and Atmospheric Administration, European Agency of Technology and Innovation Assessment, Harvard and Stanford universities, and PayPal.

"One of the biggest challenges in science policy is the ability to effectively allocate resources -- both financial and human -- in ways that foster innovation," said Börner, IU's Victor H. Yngve Distinguished Professor of Information Science. "The vast amount of data now available on science and technology, combined with remarkable growth in computing power, create ideal conditions for using computer modeling to not only understand but also predict probable future directions in science, technology and innovation."

Companies such as Netflix and Amazon regularly use advanced data mining, modeling and visualization algorithms to advance their goals, Börner added, yet government and academia have been slower to employ these tools to improve human decision-making.

Other roles that data models could play in science policy include the creation of "policy flight simulators" that empower decision-makers to test-run likely future scenarios before supporting specific projects; "science forecasts" that communicate local and global news in science, technology and innovation to a general audience; and a "FundRank model" to award research dollars based on expert crowdsourcing versus the traditional grant proposal review process.

This concept, inspired by the “PageRank” technology that powers Google, has been proposed by IU associate professor Johan Bollen, Börner and colleagues at IU. The "policy flight simulator" concept has been implemented by scientists at the Stevens Institute of Technology.

IU presenters at the conference include Santo Fortunato, professor in the School of Informatics and Computing; Timothy Slaper, director of economic analysis at the IU Kelley School of Business' Indiana Business Research Center; and Xiaoran Yan, a research scientist at the IU Network Science Institute.

Börner and Milojević will each moderate a panel discussion and deliver opening and closing remarks, respectively. Milojević will also present a talk on the role of small teams in big science era. Daniel O’Donnell, project manager for the Cyberinfrastructure for Network Science Center, will attend as the local organizer of conference activities.

"Computational and statistical modeling will become increasingly important to science policy, since we need to understand the principles that govern the practice of science to maximize its benefits to society," said Milojević, IU associate professor of information and library science, whose own research involves creating models of how teams emerge and grow. "I'm excited about this conference, which will bring together leading experts in the modeling of science. We hope to help bridge the gap between academic, interdisciplinary research and real-world decision-making by policy-makers and funding agencies."

In addition to the NSF-funded conference, Börner recently played a role at another major conference on big data and science policy, presenting at the International Symposium on Science of Science at the Library of Congress in March. Other IU talks at this conference were delivered by Ying Ding, Filippo Menczer and Filippo Radicchi, all in the IU School of Informatics and Computing, and Weihua An in the College of Arts and Sciences' Department of Sociology and Department of Statistics.