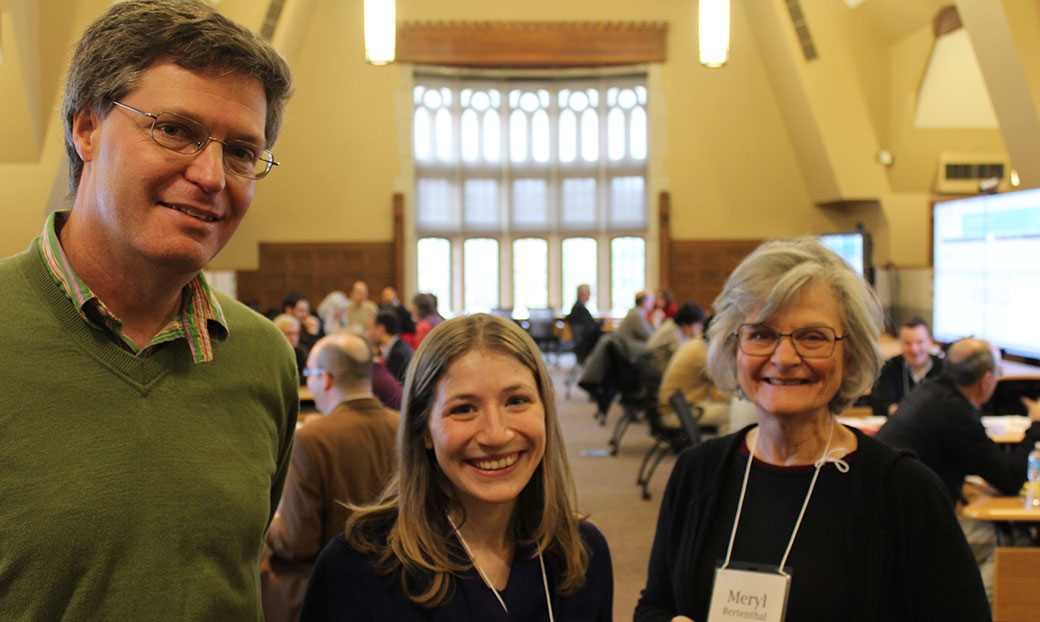 The electricity in the room was humming, and not just on account of the state-of-the-art digital technology. At each table a pair of scientists and/or social scientists sat across from each other, talking for five minutes until the buzzer rang with a one-minute warning. Then, it was time to move on to the next pairing and eight more rounds of speed-networking.

The Jan. 23 gathering at the Social Science Research Commons in Woodburn Hall was the second of three speed-networking events organized by Meryl Bertenthal and her team at the Office of the Vice Provost for Research in collaboration with Professor Peter Todd and graduate student Samantha Cohen, both in the Department of Psychology and Brain Sciences. The events, funded by OVPR, are part of an ongoing study on the formation of academic partnerships and the best ways to ignite them.

Half of the 25 participating faculty members were affiliated with the newly formed IU Network Science Institute, including co-director Bernice Pescosolido and institute leadership team member Katy Börner. Others, like SPEA professor Matthew Baggetta, saw network theory as potentially useful to their work.

The idea for the project began with the task entrusted to Bertenthal and her team: to build collaborations on campus and find strategies that bring researchers from different fields together. Bertenthal learned that cognitive scientist Peter Todd had run a series of speed-dating events as part of his research on how people choose their mates and his interests extended to how other kinds of human partnerships form as well. Discussions led to the current project: A two-year speed-networking study.

For Cohen, the project is satisfying as a study in social psychology- on how people choose their partners. But as an academic, she said she has a personal stake in the process, in finding out "how to optimize potential collaborations."

Todd explained that they attempt to increase the likelihood of fostering productive collaborations by considering different ways of pairing people: complementary vs. matching interests, varying degrees of similarity between interests and random pairings. Some of the algorithms used by online dating companies work better than the random pairings of a speed-dating event, Todd suggested. But the researchers have yet to complete the study and draw their conclusions.

To optimize collaboration even further, OVPR is offering $10,000 to fund up to five projects between people who initially meet and form partnerships at the event. The first speed-networking event, a slightly larger event on the topic of behavior and health, yielded six funded proposals funded by the Office of the Vice Provost for Research. One of those proposals was the first in a series of collaborative research that Psychological and Brain Sciences professor Josh Brown began with Professor Jon Macy in the School of Public Health. The two recently submitted a proposal to study drug usage in the fMRI scanner and have ideas for future projects as well.

"I've met people here I never would have met," says SPEA professor Diane Henshel. Midway through the event, she had already found at least three people she was planning to see again and one with whom she hopes to collaborate at a later stage of her current cybersecurity research. Henshel said this was a far more productive way to meet future research partners "than attending a 20-person panel."

Of the six people that library and information science professor Stasa Milojevic met, she was already planning to meet with five. "I really had fun," says Milojevic, who studies the formation of scientific teams and fields using statistical and computational modeling. Justin Garcia, a behavioral biologist at The Kinsey Institute who studies the evolution of monogamy, was excited to have met social psychologist Eliot Smith. The two had never met, though each knew of the other and had various connections and complementary interests. Smith himself noted, "Justin is focused on couples. We don't have anyone in social psychology who studies couples."

With the biology and culture of relationships on one hand and social psychology on the other, "Together we'd make a good sandwich," Garcia added.