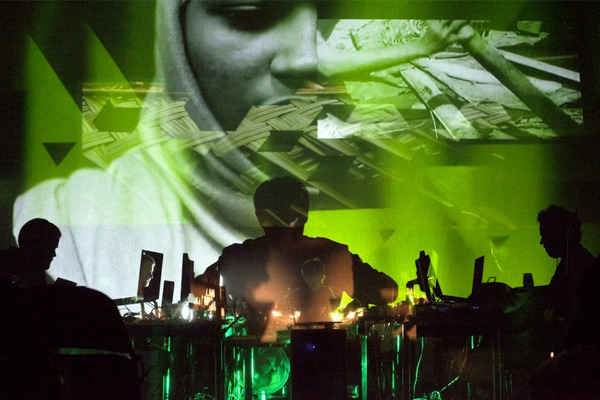 The following is an article from AdobeAirstream. Read the original article here, or download a PDF of the article here.

Currents: Santa Fe New Media Festival 2014, celebrating its fifth year from June 13-29, is one of the pre-eminent spots to take in the new in new media. This spans what multimedia artists are making and how also they are incorporating some of the most advanced technologies. How such trends between art ideation and technological invention are influencing the made object and the sensorium by which video and new media art is received, continually puts Currents at the forefront of new media art exhibition.

“One of the things we’re doing this year is expanding the multimedia performance aspect quite a bit,” said Frank Ragano, co-founder with Mariannah Amster of Parallel Studios, which organizes and runs Currents.

Opening night (June 13th) events put the spotlight on Railyard Arts District where the show’s headquarters of El Museo Cultural of Santa Fe hosts the plethora of media work, while performative and time-based projections occur in Railyard Park, after gallery exhibits open earlier in the evening at Zane Bennett Contemporary Art and David Richard Gallery. (A full schedule of events, plus a list of program partners as well as sponsors can be found on the website sidebar.) As is customary of the festival, the Digital Dome at Institute of American Indian Arts is home to a subset of programming for which viewers can recline in chairs and experience the sensurround of dome projection work. Shuttle vans will travel between the Railyard and IAIA on the first two Saturdays of Currents (June 14 and 21).

Even if the show leans heavily to newer and newest technology, “what drives each of our shows is the artists,” Ragano said.

Oscar Raby is a Chilean born multimedia designer who began a career in advertising before founding one of Chile’s most prominent artistic collectives, O-inc. in 2001. Raby has lived in Australia since 2008. His work will employ new “oculus rift” technology offering visitors the virtual reality goggles. The 10-year-old Chicago-based collaborative, Luftwerk, is interested in fully immersing viewers in a projected experience of color and light. The curators of the festival strive for mixes of emerging and established artists, and in seeking to change up their own program, this year’s performative aspect focuses on a major event on June 20th at the Lensic. That will be when the Light Surgeons perform “Super Everything.” (For tickets, visit this link.) The Light Surgeons are a group of audio-visual artists who operate as a multimedia production company in London. The live cinema aspect of the performance merges with a political theater sensibility, Ragano explained, and makes this work a new benchmark for Currents which hopes in future years to instigate a touring new media performance connected with the festival.

Visiting Currents New Media Festival in the past has purveyed the reliable sense of new media work wanting to tease apart essence from effects and substance from appurtenance. Inside the box-car like room sof El Museo Cultural you’re asked to sit, look straight ahead, look straight down, be hypnotized, engage in lucid dreaming, all the while that the ephemera of pixels present on screens or other projection surfaces purporting to alter flat to shaped — remembering that illusion in these new times is surely a condition that we can’t live without.