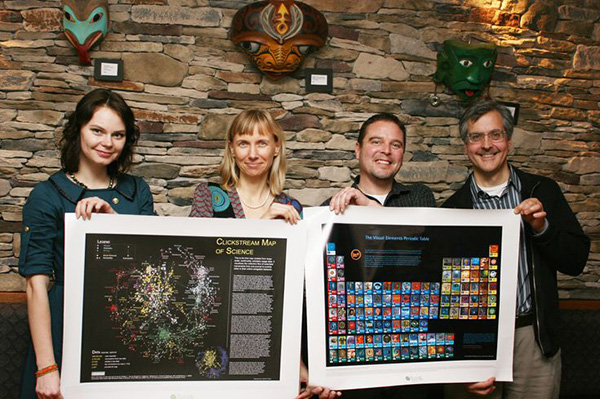 The following is an article from the IDS News. Read the original story on the web here, or download a PDF of the article here.

Map makers around the world have created maps to analyze everything from character interactions in “Lord of the Rings” to the history of science fiction for an IU School of Informatics project called “Places and Spaces: Mapping Science.”

Informatics researchers at IU are collecting an assortment of these maps to make scientific data more fun and accessible to the general public.

Project curator Todd Theriault and Katy Börner, professor and director of the IU Cyberinfrastructure for Network Science Center, presented their research on data mapping for the “Places and Spaces” project Tuesday night.

Their presentation was shown through the monthly Science Café Bloomington series for which diverse scientists come to Bloomington and present their research in an informal and relatable way.

The project focuses on visualizing data in maps that can be read and understood by anyone, even non-experts. It involves 70 map makers from around the globe, Börner said.

“As an engineer, I like to build things. I like to make things,” Börner said. “Typically as a professor at a college, you don’t get to make things. You just publish things.”

The maps covered diverse topics — from movie character interactions to international priorities, as inferred from Wikipedia searches by country.

One of the maps focused on different styles of manga art based on shading and stylization of the page. The map can be used to see what areas of manga are more popular and what areas have yet to be created.

The manga art map was part of a series geared toward children.

Börner said that by presenting the information in maps, this scientific data can become available and accessible to a much wider range of people, including kids as young as 12.

“This data was meant for a very scientific audience, and now it’s meant for my mom and kids,” Börner said. “It’s for anyone.”

Another map, called “U.S. Mood Variations Inferred from Twitter,” showed what regions of the country were feeling on a typical day. The scientists used combinations of terms from tweets to infer what mood the user was feeling.

The Science Café series is free and open to the public.

The event was in the upstairs room of Finch’s Brasserie.

There were about 20 people in attendance eating at small tables and calling out questions whenever one came to mind.

Alex Straiker was one of the founders of the Science Café series in Bloomington.

He said he saw his first Science Café event in Seattle and was excited about bringing the series to Bloomington.

“We have the resources, we have the faculty, we have a lot of scientists and researchers,” Straiker said. “Bloomington is not huge, but there’s enough of a community here. The idea is to share with community and to build a bridge with the community and the rest of the public.”

Harold Ogren and his wife, Denise, are regular members of the audience at the Science Café.

Harold is a former physics professor at IU and was part of the team of international scientists who discovered the Higgs boson particle.

“Most of the talks are very interesting. It’s also a good opportunity to come out and have a great pizza,” Ogren said.

The next Science Café will be Jan. 29.

“This is a really nice resource for those who may not be specialists in science,” Theriault said.