Put your money where your citations are: a proposal for a new funding system 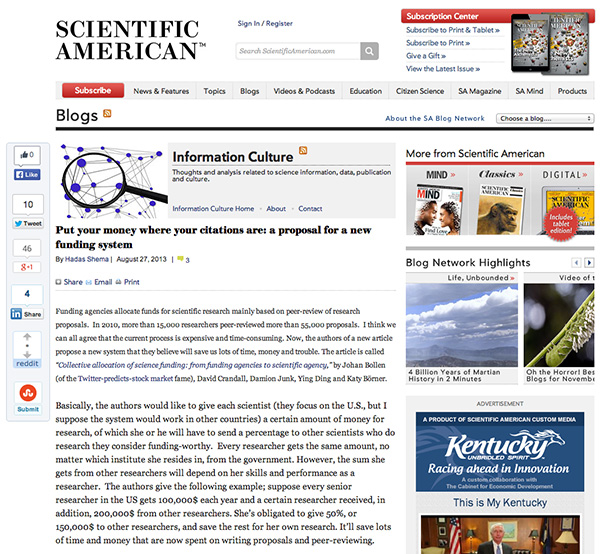 The following is an article that blogger Hadas Shema wrote in the Scientific American Blogs about an article by Johan Bollen, David Crandall, Damion Junk, Ying Ding and Katy Börner, “Collective allocation of science funding: from funding agencies to scientific agency." Read the original article here or download a PDF of the article here.

Funding agencies allocate funds for scientific research mainly based on peer-review of research proposals. In 2010, more than 15,000 researchers peer-reviewed more than 55,000 proposals. I think we can all agree that the current process is expensive and time-consuming. Now, the authors of a new article propose a new system that they believe will save us lots of time, money and trouble. The article is called “Collective allocation of science funding: from funding agencies to scientific agency,” by Johan Bollen (of the Twitter-predicts-stock market fame), David Crandall, Damion Junk, Ying Ding and Katy Börner.

Basically, the authors would like to give each scientist (they focus on the U.S., but I suppose the system would work in other countries) a certain amount of money for research, of which she or he will have to send a percentage to other scientists who do research they consider funding-worthy. Every researcher gets the same amount, no matter which institute she resides in, from the government. However, the sum she gets from other researchers will depend on her skills and performance as a researcher. The authors give the following example; suppose every senior researcher in the US gets 100,000$ each year and a certain researcher received, in addition, 200,000$ from other researchers. She’s obligated to give 50%, or 150,000$ to other researchers, and save the rest for her own research. It’ll save lots of time and money that are now spent on writing proposals and peer-reviewing.

The simulation
The authors conducted a simulation using citations as proxy for fund distribution. They extracted 37 million academic articles from Thomson-Reuters’ Web of science for the years 1992-2010, which contained 770 million references overall. Then they extracted out of more than 4 million authors those who, in the years 2000-2010, authored at least one article per year. The overall number of names was 867,872. They counted for each pair of researchers the number of citations they exchanged each year (1992-2010) and also retrieved records of 109,919 unique scientists who received 347,364 grants from the NIH and the NSF.

The simulation began with a budget of 100,000$ for each author, and assumed that the amount each researcher would allocate would be in proportion to the times they cited other researchers during the 5 years before the simulation. Of course, it’s a proxy – researchers wouldn’t necessarily allocate funds to the same researchers they cite.

Then, the authors matched names based on first, last names and middle initials with the NSF and NIF funding records. 65,610 names matched, and they compared the actual funding for 2000-2010 to the funding predicted. The correlations were R = 0.268 (Pearson) and Spearman p=0.300.

The authors emphasize that their proposal funds people rather than projects, which allows researchers more freedom than the current system. They suggest that perhaps researchers would be forbidden to contribute to their close collaborators, advisors and so forth, and that funding decisions would remain secret. I don’t know if those suggestions can stop researchers from creating “research cartels” where two researchers or more exchange funding, but we’ll cross that bridge if and when we get there. This is one way to turn the “citation economy” into an actual, money-based one. Bollen predicted in his 14th International Society of Scientometrics and Infometrics Conference (ISSI) keynote that prominent researchers would become funding agencies themselves. Imagine a world with way less grant proposals to write! It’s an intriguing concept, but I doubt governments would allow it (JUST GIVE THEM MONEY??!!)