IU's Börner has full agenda during AAAS, where five from IU will be honored 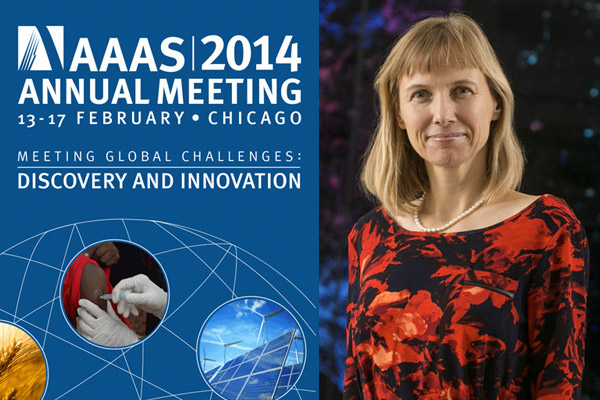 The following is an article from the IU Newsroom Science. Read the original story on the web here, or download a PDF of the article here.

BLOOMINGTON, Ind. -- The annual meeting of the American Association for the Advancement of Science gets underway Thursday in Chicago, but for Indiana University’s Katy Börner, one of the world’s largest gatherings of scientists kicks off the night before with a red carpet walk.

Börner, the Victor H. Yngve Professor of Information Science at the School of Informatics and Computing and director of the Cyberinfrastructure for Network Science Center, will be participating in Mapping the Unseen. Presented by AAAS and Imagine Science Films, Mapping the Unseen showcases a spectrum of science-related films with clips and commentaries from filmmakers and scientists.

She’ll be attending the evening of screenings, receptions and discussions as producer of "Humanexus," an animated, 12 1/2-minute semi-documentary film that “visualizes human communication from the Stone Age to today and beyond.” The award winning film is one of 11 that will have clips screened from 6 to 8 p.m. at the University of Chicago’s International House.

“The movie is the result of a unique collaboration between information scientists here at IU, with designer and artist Ying-Fang Shen and sound artist Norbert Herber,” Börner said. Shen is a former IU School of Fine Arts associate instructor and Cyberinfrastructure for Network Science Center visiting artist who is an assistant professor at Virginia Commonwealth University; Herber is a lecturer in the IU Bloomington College of Arts and Sciences’ Department of Telecommunications.

Börner on Friday will take part in a AAAS Innovation and Entrepreneurship symposium that ties directly to the overall theme of the 2014 AAAS annual meeting: “Meeting Global Challenges: Discovery and Innovation.” Considered an international expert on information visualization -- her MIT Press textbook Visual Insights is an Amazon bestseller -- Börner will join representatives of the U.S. State Department, the National Science Foundation, Stanford University and others for the symposium, “U.S. Looks to the Global Science, Technology and Innovation Horizon.” Specifically, she’ll present on the topic, “The Use of Knowledge Mapping in International STI Horizon Scanning.”

“We’re combining our expertise in developing algorithms and tools for knowledge mapping and in international science policy to describe the state-of-the-art tools available to understand knowledge distributions, networks and science futures, and how different countries and groups have used or might use such tools in their science planning, policy and investment,” Börner said of the research. She will be co-presenting with Caroline S. Wagner, an associate professor in Ohio State University’s School of Public Affairs.

The symposium will take place from 8:30 to 11:30 a.m. in Grand Ballroom C North of the Hyatt Regency Chicago.

On Thursday, Börner will also participate as a member of the Network of Diaspora in Engineering and Science, or NODES, in the Science and Engineering Diaspora Engagement, which is being co-hosted by the Embassy of Poland in Washington, D.C., and the Foundation for Polish Science. NODES is a partnership between AAAS, the U.S. Department of State, the National Academy of Sciences and the National Academy of Engineering that seeks to support diaspora knowledge networks.

The NODES event, which will include a moderated panel discussion and breakout sessions, will run from 1 to 5:30 p.m. in Regency B, Hyatt Regency Chicago.

Five from IU to be inducted as new AAAS Fellows

AAAS recently announced that five Indiana University faculty members would be inducted as newly elected fellows during the annual meeting in recognition of their scientifically distinguished efforts to advance science.

The new fellows are Dr. Bernardino Ghetti from the IU School of Medicine in Indianapolis; Provost Professor Olaf Sporns from the IU College of Arts and Sciences’ Department of Psychological and Brain Sciences; and three members of the College’s Department of Biology: Emeritus Professor Peter T. Cherbas and professors Elizabeth C. Raff and Malcolm E. Winkler. With these five, the total number of AAAS Fellows affiliated with IU is now 86.

The induction ceremony will be conducted from 8 to 10 a.m. Saturday in the International Ballroom of the Fairmont Chicago.