Making Every Scientist a Research Funder 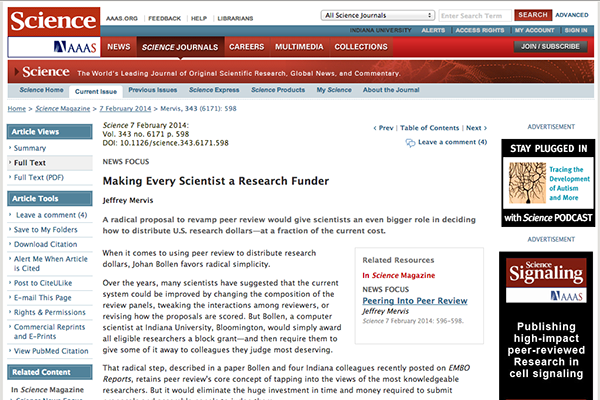 The following is an article from the journal Science. Read the original story on the web here, or download a PDF of the article here.

A radical proposal to revamp peer review would give scientists an even bigger role in deciding how to distribute U.S. research dollars—at a fraction of the current cost.

Over the years, many scientists have suggested that the current system could be improved by changing the composition of the review panels, tweaking the interactions among reviewers, or revising how the proposals are scored. But Bollen, a computer scientist at Indiana University, Bloomington, would simply award all eligible researchers a block grant—and then require them to give some of it away to colleagues they judge most deserving.

That radical step, described in a paper Bollen and four Indiana colleagues recently posted on EMBO Reports, retains peer review's core concept of tapping into the views of the most knowledgeable researchers. But it would eliminate the huge investment in time and money required to submit proposals and assemble panels to judge them.

Bollen's process would be almost instantaneous: In a version of expert-directed crowdsourcing, scientists would fill out a form once a year listing their favored researchers, and a predetermined portion of their annual grant money—a total of, say, 50%—would then be transferred to their choices.

"So many scientists spend so much time on peer review, and there's a high level of frustration," Bollen explains. "We already know who the best people are. And if you're doing good work, then you deserve to receive support."

Others are skeptical. "I've known Johan for a long time and have the highest regard for his ability as an out-of-the-box thinker," says Stephen Griffin, a retired National Science Foundation (NSF) program manager who's now a visiting professor of information sciences at the University of Pittsburgh in Pennsylvania. "But there are a number of issues he doesn't address."

Those sticking points include the likely mismatch between what researchers need and what their colleagues give them; the absence of any replacement for the overhead payments in today's grants, which support infrastructure at host institutions; and the dearth of public accountability for the billions of dollars that would flow from public coffers to individuals. "Scientists aren't really equipped to be a funding agency," Griffin notes.

Bollen acknowledges that the process would need safeguards to ensure that scientists don't reward their friends or punish their enemies. But his analysis suggests that the U.S. research landscape would not look all that different if his radical proposal were adopted.

Drawing upon citation data in 37 million papers over 20 years, the Indiana researchers conducted a simulation premised on the idea that scientists would reallocate their federal dollars according to how often they cited their peers. The simulation, he says, yielded a funding pattern "similar in shape to the actual distribution" at NSF and the National Institutes of Health for the past decade—at a fraction of the overhead required by the current system.