The Power of Scientific Mapping and Visualization: an interview with Prof. Katy Börner (website accessed 03/14/2012) 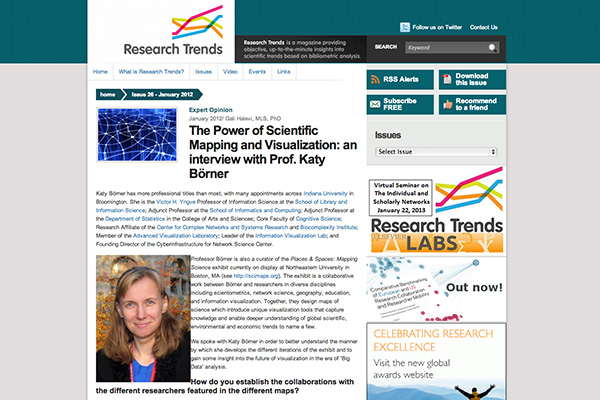 The following is an article from Research Trends. Read the original article here, or download a PDF of the article here.

Katy Börner has more professional titles than most, with many appointments across Indiana University in Bloomington. She is the Victor H. Yngve Professor of Information Science at the School of Library and Information Science; Adjunct Professor at the School of Informatics and Computing; Adjunct Professor at the Department of Statistics in the College of Arts and Sciences; Core Faculty of Cognitive Science; Research Affiliate of the Center for Complex Networks and Systems Research and Biocomplexity Institute; Member of the Advanced Visualization Laboratory; Leader of the Information Visualization Lab; and Founding Director of the Cyberinfrastructure for Network Science Center.

Professor Börner is also a curator of the Places & Spaces: Mapping Science exhibit currently on display at Northeastern University in Boston, MA (see http://scimaps.org). The exhibit is a collaborative work between Börner and researchers in diverse disciplines including scientometrics, network science, geography, education, and information visualization. Together, they design maps of science which introduce unique visualization tools that capture knowledge and enable deeper understanding of global scientific, environmental and economic trends to name a few.

We spoke with Katy Börner in order to better understand the manner by which she develops the different iterations of the exhibit and to gain some insight into the future of visualization in the era of ‘Big Data’ analysis.

How do you establish the collaborations with the different researchers featured in the different maps?
Each year, a call for maps is issued. This year’s Call for Maps for the 8th Iteration of the Places & Spaces: Mapping Science Exhibit on ‘Science Maps for Kids’ (2012) is at http://scimaps.org/call (Note: This call has now closed.) Map makers from many different countries and different areas of science submit individually or in teams. Submissions are carefully reviewed by the advisory board and external reviewers with expertise on the topic of the iteration. In 2012, we will invite children to serve as reviewers — if they cannot understand and make use of a map then this map will not be on display in the exhibit.

How important is the international aspect of the maps?
Today’s science is global and it has to be studied, mapped, understood, and managed globally. We welcome maps in all languages and from all countries and cultures.

Could you talk us through the various iterations of these maps?
The exhibit is a 10-year effort. Each year, 10 new maps are added resulting in 100 maps total in 2014. Iteration themes are as follows:

What are some of the guidelines that were developed for the iterations?
Each iteration compares and contrasts four existing maps (e.g., early cartographic maps in the first iteration on ‘The Power of Maps’) to six maps of science. Each map has to fit the theme of the respective iteration. Submissions are evaluated in terms of two kinds of values: i) Scientific value, which centers on quality of data collection, analysis and communication of results in support of clearly stated objectives, and whether the map represents appropriate and innovative application of existing algorithms and/or development of new approaches; ii) Value for user groups (e.g., kids), which considers the following questions: what major insight does the map provide and why does it matter? Is the map easy to understand? Does it inspire kids to learn more about science and technology?

Could you say a few words about the new iteration?
The 8th iteration of the Mapping Science exhibit is devoted to science maps that kids aged 5–14 can use to gain a more holistic understanding and appreciation of science and technology. Each map should be engaging and fun to peruse yet should have at least one concrete learning objective. Among others, the maps might depict:

Maps are intended to give children the exciting opportunity to immerse in, explore, or navigate the landscape of science and to find their own place.

Places & Spaces: Mapping Science is a travelling exhibition. Can any interested party purchase their own maps and display them?
Maps are on display at public libraries, science museums, national academies of science, universities, companies and are seen, discussed, admired, and purchased by scholars, practitioners, educators, and others. Maps are available for sale at http://scimaps.org/store and proceeds help finance the creation of new iterations and their display at public venues.

How do you think ‘Big Data’ computation will influence the production and usefulness of scientific maps?
The bigger and more complex the datasets, the higher the need for effective data mining and visualization to guide data management, navigation, and utilization. Originally, publication, funding, and patent data were dominantly used in science of science studies. Today, researchers also study science news, job market, and even S&T twitter data—in real time. The monitoring, mining, modeling, and visualization of all relevant data streams in many different languages and the wide-spread distribution of results will require major computational infrastructures.

Is the visualization technology there to deal with big-data issues such as size and complexity?
The total number of scholars, papers, books, patents, and grants in existence today is rather small when compared with datasets generated and mined in medicine, physics, or meteorology. Tools like the Network Workbench (NWB) or Science of Science (Sci2) tool can extract, analyze, and layout networks with a million nodes. The NIH Map Viewer lets you interactively browse multiple years of funding by the National Institutes of Health. The mapping sustainability project maps seven different paper, patent, and funding datasets in geospatial and topic space (http://mapsustain.cns.iu.edu).

Do you feel that the explosion in software solutions for network data management and visualization (including Network Workbench) has made life easier or harder for network scientists and in what way?
The Network Workbench was designed for researchers, educators, and practitioners interested in the study of biomedical, social and behavioral science, physics, and other networks and has been downloaded by 110,000 users around the globe. The Science of Science (Sci2) Tool was developed for science policy makers and researchers that study science by scientific means. It supports temporal, geospatial, topical, and network analysis and visualization of scholarly datasets at the micro (individual), meso (local), and macro (global) levels, and is used by many scholars, practitioners, and major agencies such as the National Science Foundation, the National Institutes of Health, the US Department of Agriculture, and the National Oceanic and Atmospheric Administration. While the agencies cannot share their data holdings, they can apply the very same analysis workflow to their internal data and compare results across agency boundaries. Plus, program officers and analysts can use Sci2 to download and analyze relevant data from, for example, Elsevier’s Scopus or Thomson Reuter’s Web of Science databases. Instead of getting a report from a contractor they now have an easy-to-use tool to answer their very own questions.