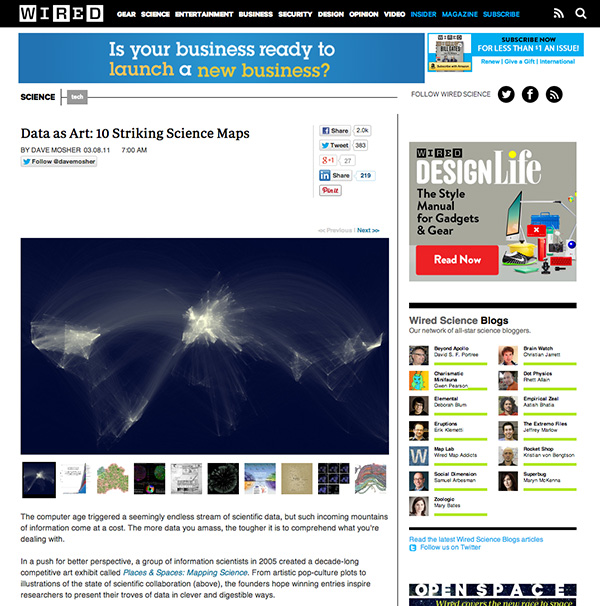 The following is an article from Wired Science. Read the original article here, or download a PDF of the article here.

The computer age triggered a seemingly endless stream of scientific data, but such incoming mountains of information come at a cost. The more data you amass, the tougher it is to comprehend what you're dealing with.

In a push for better perspective, a group of information scientists in 2005 created a decade-long competitive art exhibit called Places & Spaces: Mapping Science. From artistic pop-culture plots to illustrations of the state of scientific collaboration (above), the founders hope winning entries inspire researchers to present their troves of data in clever and digestible ways.

"Good science maps give you a holistic understanding of how the data is structured," said information scientist Katy Börner of Indiana University, a founder and curator of the exhibit. She is also author of the Atlas of Science, a collection of the maps gathered over the years. "You don't just have to use maps to find your way home. They can be ways to get global overviews on topics."

The exhibit's advisory board follows a theme and some core criteria to pick 10 winners each year. This year's winning entries for the theme "science maps as visual interfaces to digital libraries" were announced this week. Exhibit-ready versions of the maps are scheduled for display in mid-June.

We showcase some of our favorite winners here, in addition to a few that didn't make the final cut. Some maps are too small to properly appreciate here, but we include links to high-resolution versions for each of them.

Scientific Collaboration
Inspired by a map of 500 million Facebook friends published in December 2010, research analyst Olivier H. Beauchesne created this winning visualization of international collaboration that occurred from 2005 through 2009.

Each arc represents a collaboration between scientists in different cities mined from studies, books and trade journals found in Elsevier's Scopus database. Dense nodes of science emerge in the Americas, Europe and Japan.