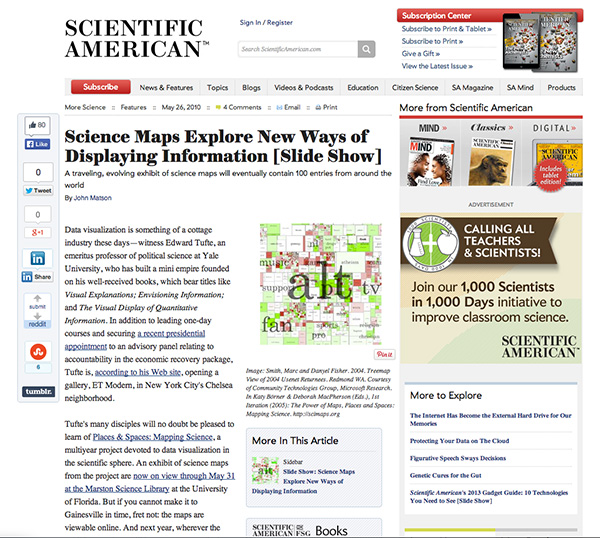 The following is an article from Scientific American. Read the original article on the web here, or download a PDF of the article here.

Data visualization is something of a cottage industry these days—witness Edward Tufte, an emeritus professor of political science at Yale University, who has built a mini empire founded on his well-received books, which bear titles like Visual Explanations; Envisioning Information; and The Visual Display of Quantitative Information. In addition to leading one-day courses and securing a recent presidential appointment to an advisory panel relating to accountability in the economic recovery package, Tufte is, according to his Web site, opening a gallery, ET Modern, in New York City's Chelsea neighborhood.

Tufte's many disciples will no doubt be pleased to learn of Places & Spaces: Mapping Science, a multiyear project devoted to data visualization in the scientific sphere. An exhibit of science maps from the project are now on view through May 31 at the Marston Science Library at the University of Florida. But if you cannot make it to Gainesville in time, fret not: the maps are viewable online. And next year, wherever the exhibit goes, there will be even more on display.

"Every year we add 10 new maps," explains co-curator Katy Börner, a professor of information science at Indiana University Bloomington. Each year has a different theme, Börner notes—this year's theme is "science maps for scholars". In 2014, at the end of the 10-year project, the exhibition will contain 100 maps representing a diverse range of uses for scientific information—some maps are intended for policymakers, some for librarians, some for children. And although many are "maps" in the strictest cartographic sense of the world—visual plots of geographic information—others are more abstract, charting scientific data or trends.

The unifying goal is that the maps present a viewpoint that is both compelling and informative. "These maps are not designed to be eye candy; they are designed to convey information," Börner says. "The point is to engage the viewer's eyes and minds."