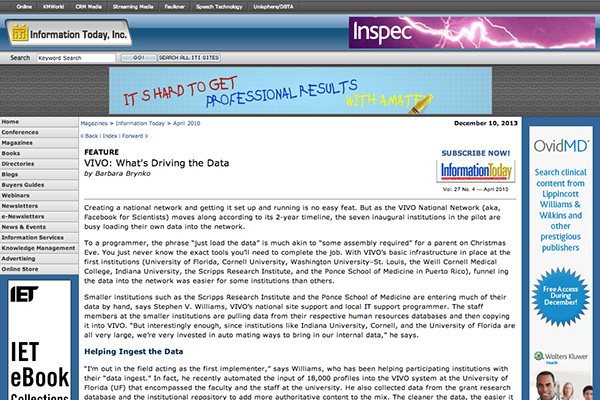 The following is an article from Information Today. Read the original article on the web here, or download a PDF of the article here.

Creating a national network and getting it set up and running is no easy feat. But as the VIVO National Network (aka, Facebook for Scientists) moves along according to its 2-year timeline, the seven inaugural institutions in the pilot are busy loading their own data into the network.

To a programmer, the phrase “just load the data” is much akin to “some assembly required” for a parent on Christmas Eve. You just never know the exact tools you’ll need to complete the job. With VIVO’s basic infrastructure in place at the first institutions (University of Florida, Cornell University, Washington University–St. Louis, the Weill Cornell Medical College, Indiana University, the Scripps Research Institute, and the Ponce School of Medicine in Puerto Rico), funnel­ ing the data into the network was easier for some institutions than others.

Smaller institutions such as the Scripps Research Institute and the Ponce School of Medicine are entering much of their data by hand, says Stephen V. Williams, VIVO’s national site support and local IT support programmer. The staff members at the smaller institutions are pulling data from their respective human resources databases and then copying it into VIVO. “But interestingly enough, since institutions like Indiana University, Cornell, and the University of Florida are all very large, we’re very invested in auto­ mating ways to bring in our internal data,” he says.

“I’m out in the field acting as the first implementer,” says Williams, who has been helping participating institutions with their “data ingest.” In fact, he recently automated the input of 18,000 profiles into the VIVO system at the University of Florida (UF) that encompassed the faculty and the staff at the university. He also collected data from the grant research database and the institutional repository to add more authoritative content to the mix. The cleaner the data, the easier it is to move forward with the project and build on it.

Jon Corson-Rikert, the head of information technology services at Cornell University’s Mann Library and VIVO creator, realized the importance of getting vetted data into the network from the start. “We knew quite early on that we had to use institutional sources of data,” he says, “and it just wouldn’t be sustainable if we started to input all of the data manually or if we just copied and pasted other webpages into the network.” So he reached out to several key players at Cornell, including the university human resources system called PeopleSoft (to export data about people and positions), the grants database (to find current grants, funding information, and patterns of funding research), and the courses database. “Then we supplemented that data with an interactive interface where people could edit the information themselves to add new data or supplement it with updates on anything new such as international activity,” he says.

Every institution is treated as a separate silo, according to Corson-Rikert. “One of the tenets for the grant is that there has to be an institutional buy-in to the product,” he says. Each institution is required to have its own local, sustainable version that doesn’t require continual federal funding. The goal is to ensure local customization for any additional granularity and to eventually make the data available to a national network level for discovery.

Much of the brain power behind VIVO’s development at Cornell was provided by Brian Caruso and Brian Lowe, programmers/developers who have been instrumental in helping Corson-Rikert transform VIVO from a people-finding service into a semantic web application. And their work continues as VIVO is enhanced and upgraded.

One of the next items on the to-do list is creating a linked data compatibility for the VIVOnetwork. “This is a way to expose the data within any VIVO profile so that it can become part of the semantic web as a larger and more seamless way to get data visible from one application to another on the web,” says Corson-Rikert. Much of what the VIVO National Network is trying to do is to unlock this institutional data that has long been hidden in silos. Once the data has been unlocked, it can be available on a consistent platform at the universities and then ultimately to a broader audience so that the world can access this authoritative data.

And there have been more than a few surprises along the way. Although the team initially figured that accessing institutional data would be easy, that hasn’t always been the case. In theory, the data would always be available in one place, where it could be found easily and pulled into the database. Plus, not all institutions can provide a coherent map of their organizational structure, so sometimes there’s no database that explains intradepartmental ties, according to Williams. “The financial data tells you where the money goes,” he says, “but we don’t always see the lines connecting the reporting process. A couple of institutions actually had to draw in those dotted lines that just don’t show up on [the] financial database.”

One of the challenges that universities face is that they are meeting so many compliance requirements and regulations, says Corson-Rikert. “Their systems must be driven by what they must do,” he says. “Institutions don’t always get a chance to develop things that are academically useful for the school and for communicating who they are to the outside world,” he says. Obviously, much work goes into creating the schools’ webpages, which are chiefly designed for student recruitment or marketing purposes. “But some of the feedback we’ve received about VIVO is that academics like to see something that is obviously meant for the exchange of information about what people are doing in their academic lives, their teaching, their research, their interests, and it doesn’t require any understanding of the administrative portion of the university to approach it or navigate it.”

Corson-Rikert sees plenty of questions on the road ahead in terms of scalability and how other people will ultimately use VIVO. “We’re very open to that,” he says. “With the semantic web, we want to make sure the data is in a very standard format so users can exchange structured data. There are lots of other tools that work with that data too. So we’re not locked into one solution.” The collaboration among the universities in the pilot stage may have been slow at first, according to Williams, “but thatthe way projects tend to go. Everyone is just testing the waters.” Now people are getting more comfortable talking about problems with the ontologies or with the data in conference calls or wikis.

So far, the team is quite encouraged with the progress of the pilot project. “It’s gratifying to see schools being able to load data in and essentially do real work with it,” says Corson-Rikert. The word is already spreading across the globe. The University of Melbourne in Australia has adopted VIVO as part of its work on developing a template application for the Australian national data register. Likewise, China has three installations of VIVO hosted by the Chinese Academy of Sciences as disciplinary research portals for biodiversity, evolutionary biology, and biomedicine and health across 28 member institutions.

“We’re doing a lot of work on the infrastructure, improving the way the software was built, putting in documentation, and putting in safeguards to tell us when links have broken,” says Corson-Rikert. “This lays a solid foundation for us, so that as the VIVO National Network expands, we’ll have a good handle on what is going on.”