Places and Spaces shows the power of maps 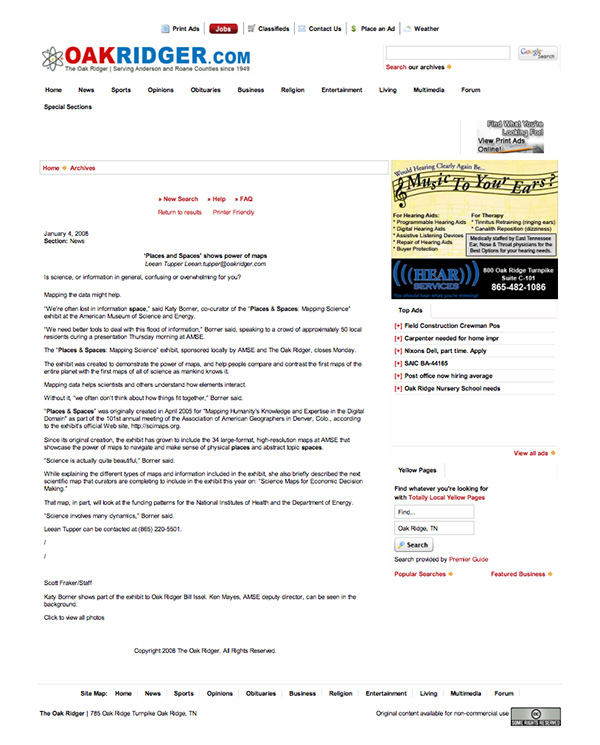 The following is an article from OakRidger.com. Read the original article on the web here, or download a PDF of the article here.

Is science, or information in general, confusing or overwhelming for you?

“We need better tools to deal with this flood of information,” Borner said, speaking to a crowd of approximately 50 local residents during a presentation Thursday morning at AMSE.

Mapping data helps scientists and others understand how elements interact.

Without it, “we often don’t think about how things fit together,” Borner said.

“Places & Spaces” was originally created in April 2005 for "Mapping Humanity's Knowledge and Expertise in the Digital Domain" as part of the 101st annual meeting of the Association of American Geographers in Denver, Colo., according to the exhibit’s official Web site, http://scimaps.org.

Since its original creation, the exhibit has grown to include the 34 large-format, high-resolution maps at AMSE that showcase the power of maps to navigate and make sense of physical places and abstract topic spaces. “Science is actually quite beautiful,” Borner said.

While explaining the different types of maps and information included in the exhibit, she also briefly described the next scientific map that curators are completing to include in the exhibit this year on: “Science Maps for Economic Decision Making.”

That map, in part, will look at the funding patterns for the National Institutes of Health and the Department of Energy.