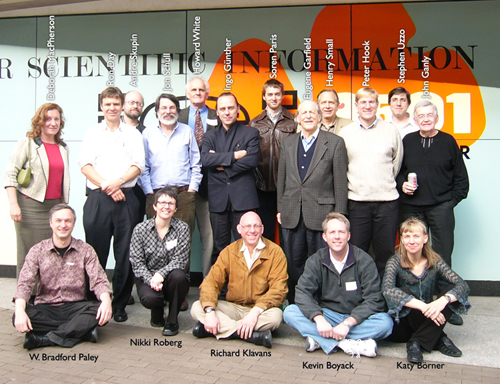 More Photos from the Workshop

This 1.5 day, invitation-only workshop will bring together programmers and power users of major visual analytics/science of science tools. Key goals of the workshop are


Format is a combination brief presentations, brainstorming sessions, and hands-on sessions--to be finalized when participants are confirmed.

Participants, please fill out this PR^2 and send to Samantha Hale (ude.anaidni@elahjs) by October 18!

Please see here about setting up the Development Environment.

Visiting Assistant Professor of Library and Information Science, SLIS, Indiana University
Expert in the history, culture and political economy of information, documentation, communication, knowledge, and digital media, particularly in the 20th and into the 21st centuries.
PR^2

Chief Scientist at Thomson Scientific
Scientometrics pioneer. Created first map of all of science. President of the International Society for Scientometrics and Informetrics. Host of the meeting.
PR^2 | PPT

Director of Technology, New York Hall of Science
Collaborated on the design of Connections - The Nature of Networks. Interested in "How do we best educate people as to the scope of science disciplines. ... [the public] in general, has a poor grasp of what the definition is of science itself ... they only know something is science because we tell them it is."
PR^2

This meeting will bring together librarians, cartographers and geographers, computer and information scientists, bibliometricians and scientometricians, artists and designers, educators and others with a deep interest in improving access to mankind's scholarly knowledge and expertise. Many invitees are advisory board members of the Places and Spaces science exhibit. Since April 2005, the exhibit has been displayed at 18 national and international venues attracting a lot of attention and educating people about alternative means - besides Google and other search engines - to access and make sense of what we collectively know. It has also led to the fact that some of us have many more projects and requests for maps of science than they can possibly handle. Meeting Goals

This meeting has two goals: (I) It brings together science mapping researchers, designers and educators in an attempt to pool existing tools and resources so that a larger number of well funded requests for easily to understand maps of science can be satisfied. (II) We would like to discuss the next nine iterations of Places and Spaces in an attempt to develop a cohesive outline and plan the next nine years of computational scientometrics research to further bridge the gap between scholarly science mapping efforts and the needs of the general public to benefit and be able to learn from the steadily increasing flood of scholarly data. We plan to realize one iteration per year and envision the followng themes:

This effort is supported by the James S. McDonnell Foundation and the Cyberinfrastructure for Network Science Center at Indiana University.