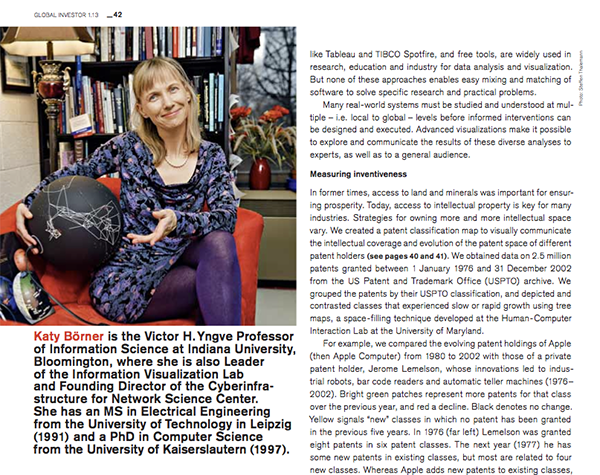 The following is an article on Big Data by Katy Börner that was featured in Global Investor Magazine. Click here to download a PDF of the original article.

Across the spectrum of human activity, decision making increasingly means fathoming the complex systems described by Big Data. Examples include traffic patterns, disease outbreaks and social media. Often, the most effective way of coming to terms with this data is by picturing or visualizing it. Throughout history, many of the best tools for visualization have been designed by scientists keen to observe or comprehend something for the first time. In the early 1600s, Galileo Galilei recognized the potential of a spyglass to study the heavens, and ground and polished his own lenses. He then used these improved optical instruments to make discoveries like the moons of Jupiter, providing quantitative evidence for Copernicus’s startling insight that the earth revolves around the sun and not the other way around.

Today, scientists and industry professionals repurpose, extend and invent new hardware and software to visually make sense of and address local and global challenges. For example, they might combine data on global population density, patient records and social behavior – all large, complex data sets – to model, visualize and forecast the spread of epidemic diseases. Or they might (and did) map how New York City tweeted during Hurricane Sandy. Multivariate visualization is not new. In 1786, William Playfair published the first known time series by charting English exports and imports over 80 years. In 1861, Charles Joseph Minard famously plotted date, temperature, direction of movement and three other variables in a poignant “narrative” graphic of Napoleon’s failed Russian campaign. What is different now is the sheer volume of data to be sifted through.

Visualizing Big Data is inherently collaborative. But good data sets are hard to obtain, and standard tools are lacking. Consequently, at the Cyberinfrastructure for Network Science Center at Indiana University, we have created an open-source, community-driven project for exchanging and using data sets, algorithms, tools and computing resources. In particular, we have developed software tool sets (called “macroscopes") that enable non-computer scientists to plug and play data sets and algorithms as easily as they share images and videos using Flickr and YouTube. Our tools have been downloaded by more than 100,000 users from over 100 countries.

Other open-source software projects, such as Google Code and SourceForge.net, do exist. Websites like IBM’s Many Eyes enable community data sharing and visualization. Commercial programs like Tableau and TIBCO Spotfire, and free tools, are widely used in research, education and industry for data analysis and visualization. But none of these approaches enables easy mixing and matching of software to solve specific research and practical problems.

Many real-world systems must be studied and understood at multiple – i.e. local to global – levels before informed interventions can be designed and executed. Advanced visualizations make it possible to explore and communicate the results of these diverse analyses to experts, as well as to a general audience.

In former times, access to land and minerals was important for ensuring prosperity. Today, access to intellectual property is key for many industries. Strategies for owning more and more intellectual space vary. We created a patent classification map to visually communicate the intellectual coverage and evolution of the patent space of different patent holders (see pages 40 and 41). We obtained data on 2.5 million patents granted between 1 January 1976 and 31 December 2002 from the US Patent and Trademark Office (USPTO) archive. We grouped the patents by their USPTO classification, and depicted and contrasted classes that experienced slow or rapid growth using tree maps, a space-filling technique developed at the Human-Computer Interaction Lab at the University of Maryland.

For example, we compared the evolving patent holdings of Apple (then Apple Computer) from 1980 to 2002 with those of a private patent holder, Jerome Lemelson, whose innovations led to industrial robots, bar code readers and automatic teller machines (1976– 2002). Bright green patches represent more patents for that class over the previous year, and red a decline. Black denotes no change. Yellow signals “new” classes in which no patent has been granted in the previous five years. In 1976 (far left) Lemelson was granted eight patents in six patent classes. The next year (1977) he has some new patents in existing classes, but most are related to four new classes. Whereas Apple adds new patents to existing classes, Lemelson follows a different strategy to claim more and more intellectual space. This longitudinal comparison helps to reveal an assignee’s past, current (and possibly future) intellectual limits and patenting behavior.

Data literacy will soon be as important as being able to read and write. In January 2013, registration opened for the Information Visualization MOOC (massive open online course) that I am teaching at Indiana University. Students from 93 different countries are taking theory and hands-on lessons. The course introduces a theoretical framework that helps non-experts to assemble advanced analysis workflows and to design different visualization layers, i.e. base map, overlay (real-time) data, and color and size coding. The framework can also be applied to “dissect” visualizations so they can be interpreted and optimized. As part of the course assignments, students work in teams on real-world client projects.

Developing the visualization tools to handle Big Data images, videos and data sets for scholarly markets remains a work in progress. Our current efforts focus on ways of ensuring data quality, dealing with streaming data such as from social media, and making our tools more modular and even easier to use. The ultimate goal of Big Data visualizations is to understand and use our collective knowledge of science and technology to enable anyone to explore complex technical, social and economic issues and to make better decisions.