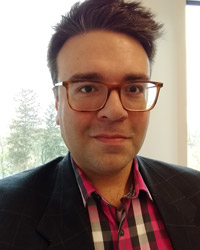 Background
I joined CNS in November of 2018. I previously spent 12 years as a Research Assistant for the Department of Prospect Management and Research at the Indiana University Foundation, where I used news aggregators to track “breaking news” on current and potential donors to IU. Priority was focused on principal giving prospects – donors of highest net worth and varying levels of capacity/inclination to give to IU. Prior to my stint at the Foundation, I spent nearly two years at the Kelley School of Business as a Secretary in the Department of Finance. I first “got my foot in the door” at IU in 2004, just prior to completing my undergraduate degree, spending a brief time as an hourly worker doing “IT stuff” for SICE.

Personal
For me, it’s all about family. I enjoy spending my free time with my wife and four children: three sons (two of which are twins) and a daughter. I also have a Korat cat named Willow Sammy. I serve as a Den Leader for a local Boy Scouts pack, which includes my oldest son. Having a large family gives me little time to do much of anything else – but I wouldn’t trade this experience for anything else in the world!